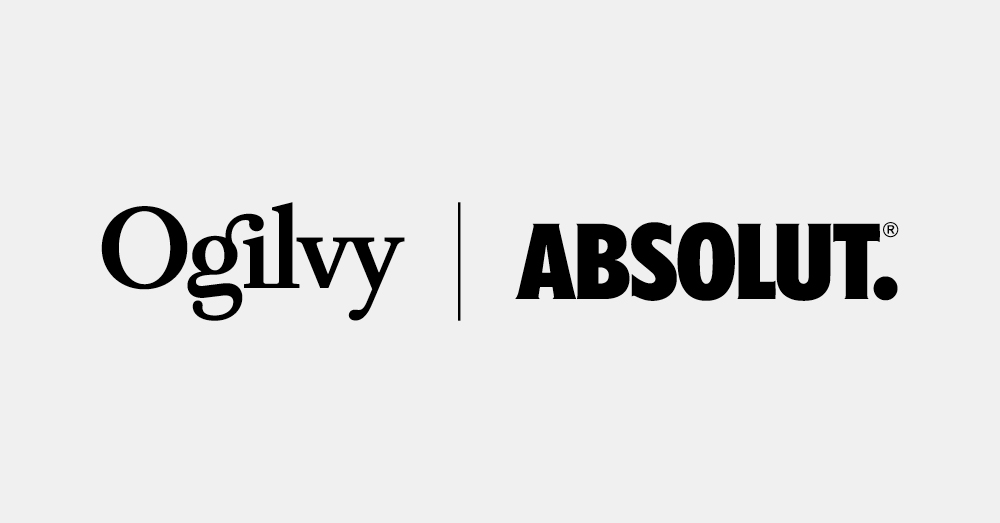 NEW YORK — March 19, 2021 — Ogilvy today announced it has been selected by Absolut Vodka, one of the most iconic spirits brands in the world, as its new global lead creative agency. Ogilvy’s remit will include global strategic and creative duties for the brand, focusing on its lead market priorities, with the ambition to accelerate its leadership position.

The Swedish vodka is recognized as a leading premium vodka brand, associated with promoting progressive values since its inception in 1879. The brand is well-known throughout the industry for its sound commitments in terms of sustainability. By applying its one source, one community approach, Absolut emphasizes its origin and close connection to the area that surrounds the distillery, which is one of the world's most energy efficient. An important part of Absolut Vodka's strong heritage is also the brand's creative advertising, through decades of collaborations with fashion designers and artists including Jean-Paul Gaultier, Andy Warhol, Tom Ford, Keith Haring, Stella McCartney and Anne Imhof.

Andy Main, Ogilvy’s Global CEO, said: “Ogilvy is proud to be chosen by Absolut, a globally iconic brand, to be their creative partner for growth. We admire Absolut’s strong heritage of using creativity to drive meaningful connections and influence culture. Our team is excited to use the borderless creativity of Ogilvy’s global network to deliver the innovative work that will win the attention of people around the world.”

Tad Greenough, Absolut’s Global Chief Creative Officer, said: “Absolut has an incredible legacy of creating extraordinary and unexpected communications, of being a cultural provocateur. As the brand continues to see tremendous momentum globally, we wanted a network partner that can deliver the strategic and creative excellence that Ogilvy has demonstrated time and time again.”

Charl Bassil, Global Vice President Marketing at The Absolut Company, commented: “We at Absolut are delighted to announce that Ogilvy has been appointed as our global agency network. This is a such an important appointment for us and a signal of our intent to work alongside our global markets in a more coordinated and integrated manner, while continuing to tap into locally relevant consumer insights. At The Absolut Company, we fundamentally believe that agency partnerships are more effective than transactional supplier relationships. We know that through genuine partnership, we are able to build open, transparent relationships that include a shared view of success and shared accountability. Ultimately Absolut has been built on the idea that we can create better together. With that in mind, we believe we have found the right partner in Ogilvy.”

Ogilvy was awarded the business after a competitive pitch with an undisclosed roster of global agencies. The review was led on the Absolut side by Tad Greenough, with support from Observatory International, based in London. Ogilvy’s pitch included ideas from global creative teams led by Marcos Kotlhar and Danilo Boer, Chief Creative Officers of Ogilvy New York, and Björn Ståhl, Chief Creative Officer of INGO, and was strategically led by Philip Heimann, Global Chief Marketing & Growth Officer, and Antonis Kocheilas, Global CEO of Advertising.

This news follows the recent announcement that Ogilvy was selected by Pernod Ricard USA to serve as the lead creative agency for Olmeca Altos Tequila, Tequila Avión, and Del Maguey.

About The Absolut Company

The Absolut Company has the worldwide responsibility for the production, innovation and strategic marketing of Absolut Vodka, Malibu, Kahlúa and Our/Vodka. Absolut Vodka is one of the world’s leading spirits brand. Every bottle of Absolut Vodka comes from one source, Åhus in southern Sweden. The head office is located in Stockholm, Sweden. The Absolut Company is a part of Pernod Ricard, which holds one of the most prestigious brand portfolios in the sector.

Ogilvy has been producing iconic, culture-changing marketing campaigns that have grown brands and businesses since the day its founder David Ogilvy opened up shop in 1948. Today, with 132 offices in 83 countries, Ogilvy’s singular ambition is to be the best creative partner and platform for growth on the planet. Ogilvy’s deep expertise in almost every field coupled with its award-winning global network allow it to scale value-driving ideas at lightning speed – all powered by world-class creativity to give clients an unfair advantage in this complex, noisy, hyperconnected world. In 2020, two of the world's most prestigious creative award shows, D&AD and The One Show, recognized Ogilvy as the Network of the Year, a reflection of its ability to use creativity to transform business and culture. Ogilvy is a WPP company (NASDAQ: WPPGY). For more information, visit Ogilvy.com, and follow Ogilvy on Twitter, Instagram, Facebook, and LinkedIn.

Interested in bigger, bolder ideas? Sign up for our newsletter for more insights on how brands can make an impact on the world.
238
Ideas Generic Subscribe Link

The Monkeys, The Movies, and Mum: Storytelling Our Way to Sustainable Development

What can Bradley Cooper, Lady Gaga, monkeys, and 18th Century feminists teach us about how to bring the world together to achieve our Sustainable…

Business in the Era of Conversation

Conversational commerce has well and truly arrived but what does that mean for brands?

Being recognized once again by Gartner is a tremendous honor," says Carla Hendra, CEO of Growth & Innovation.

Will Asia Regain its Velocity Following the Pandemic?

COVID-19 constitutes the largest economic shock in decades. Will Asia bounce back, or is it forever changed?

Ogilvy’s remit will include global strategic and creative duties for the brand, focusing on its lead market priorities.

5 Guidelines to Ensure Your Business is Built for Growth

For firms who want to leverage innovation to discover opportunities for new growth, there are five keys to keep in mind.

Lisa will be responsible for leading creative across the agency’s diverse portfolio of clients in California and beyond.

How brands can deliver against their social and commercial imperatives, while realizing the value of good intentions.

Is Clubhouse the Next Great Social Platform for Brands?

The app's low friction way of pulling people into a live conversation is innately social at its core.

Will the difficult circumstances of the last year eject us back into travel mode, or will we emerge cautiously and tentatively?

Loyalty Programs in the Middle East: For Love and Not Just Money

Ogilvy today announced it has been selected by Pernod Ricard USA to serve as the lead creative agency for its tequila and mezcal brands.

Authenticity, connection and value are the keys to keeping the relationship between people and tech mutually beneficial.

'Art, Science and Soul': Stacey Ryan-Cornelius on The Reset Podcast

Ogilvy's Global Chief Financial Officer talks her journey on a recent episode of The Reset Podcast.

A Tribute to Edmond Moutran

The Founder and Chairman of MEMAC Ogilvy passed away in Beirut at the age of 77.

Conversations That Matter—From Start-Up to Scale-Up

A strong brand is the cornerstone of any successful, growing company.

The explosion of remote connectivity has led to enhanced engagement between doctors and the pharmaceutical industry.

Opportunity has arisen for alcohol and spirits brands to take on new meaning, capital, and social currency.

Benoit de Fleurian recently presented a Brandsutra session all about the importance of behavioral science in persuasive communication.

How to reinvent personas to inform a better, more precise crafting of message framing and content.

Brochurewares, Nightmares, and Selling or Else: Carla Hendra Chats with 'You Shoulda Been There'

Carla Hendra joined "You Shoulda Been There" to recount her experiences during the internet boom of the 90s and more.

DAVID is opening a new office in Latin America, expanding its operation into Colombia.

Conversations That Matter—Digital Trends Worth Remembering From 2020

2020 was a challenging year, but one that brought us valuable lessons with lasting learnings.

What Advertising Can Learn From Evolutionary Psychology

How evolutionary psychology can provide practitioners with a framework to plan, create and design ads.

The latest Conversations in Health Webinar focuses in on the trends in digital health to take hold in 2021 and beyond.

Ogilvy has received a perfect score of 100 on the 2021 Corporate Equality Index (CEI).

Ogilvy Greece Named Agency of the Year At Effies Hellas

The agency won a total of 9 Effies, including the Grand Effie for Lacta's "Act for Love" campaign.

Our speakers discussed  the transformation of retail in this new age, and what brands can do to get a leg up.

Advice For Telecoms: Do What's Counter-Intuitive

While we’re relying on our service providers more than ever, a lack of love for the sector remains.

"Today We Rise" is a new film released by Girl Up in partnership with Refinery29 and Ogilvy.

The Explosion of Virtual Health in the Field of Mental Health

As the need for mental health support services continues to grow, providers have pivoted quickly to telehealth options.

Ogilvy Health CEO Kate Cronin on the pandemic's impact on healthcare brands, the future of wellness, and more.